Anyone who is involved in the German culture of remembrance bears a special responsibility. Kani Alavi, chairman of the East Side Gallery Association appears to international press and state representatives as the father of the ESG. But its founder is someone else: Dave Monty. 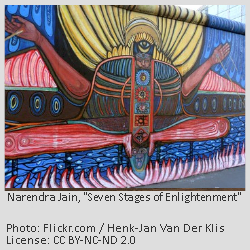 The West German artist Dave Monty is the father and name giver of the Berlin East Side Gallery. He was supported in his plan to create the largest open-air gallery in the world by the West Berlin artist Heike Stephan. Monty conducted the necessary negotiations with the responsible GDR Ministry for National Defense (MfNV). Eventually he received permission to have the east side of the Berlin Wall painted by artists. In 1989, the Indian Dr. Narendra Kumar Jain started to create the first picture. In December 1989 artists and the artists associations of East and West Germany were mobilized due to Monty’s press initiative.

Meanwhile Heike Stephan left the project. Dave Monty hired the Scottish native Christine MacLean as coordinator. On February 16, 1990, meetings with the artists associations in East and West Berlin were held. Monty insisted on having the East Side Gallery funded by Western (American) corporations. The companies should get advertising space on the wall. Such commercialization was unacceptable, especially for the East German Artist Association. The first German-German art project threatened to fail. In fact, it broke in April 1990. Dave Monty, who wanted to stick to his funding plan, had to leave the project.

During this time, Rainer Uhlmann’s Advertising and Event Agency (WUVA) appeared on the scene. The WUVA was authorized to market the entire wall section that was intended to become the East Side Gallery. Meanwhile administrative responsibilities had shifted due to the political change. The GDR Ministry for National Defense, with which Monty had successfully negotiated, was no longer responsible, but the former Berlin district of Friedrichshain. WUVA had a valid contract with that district. 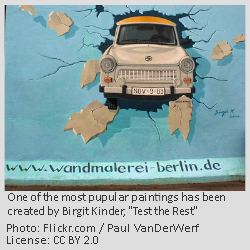 Christine MacLean convinced WUVA to continue the East Side Gallery project. She was hired by the company as a project coordinator. The 118 artists of the East Side Gallery did not receive any fee from the WUVA either. However, the advertising agency WUVA produced fan items such as postcards, T-shirts and mugs, which were sold to tourists on site in the former guards‘ house. The artists also didn’t get any profit shares on the sales, although they had to give all exploitation rights to WUVA for five years.

Kani Alavi was among the artists who answered the call to the Berlin Wall. When the contract between the artists and WUVA expired in 1995, some of the artists organized themselves in the new founded East Side Gallery Association. They wanted to ensure the preservation of the pictures and the gallery. Kani Alavi has been the first chairman since the association was founded in 1996. Since then, he has made a significant contribution to maintaining the East Side Gallery. His commitment includes restoration and fundraising campaigns, taking care of public relations and organizing protests against real estate companies, who sought to build apartments where the East Side Gallery stands. 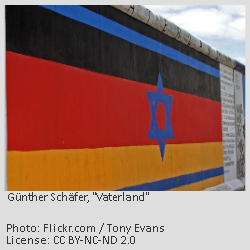 Kani Alavi hides a part of German-German history and stages himself as the main character in his own founding myth.

In September 2019, the co-chair of the German-Korean Forum published an article about a tour with Kani Alavi at the East Side Gallery. The former Prime Minister of South Korea Myeong-sook Han was also present. She supports Kani Alavi’s plans to build a similar gallery on the demarcation line between North and South Korea. Artists from North Korea should also be invited to artistically overcome the separation of the two countries. In the report of the German-Korean Forum, Kani Alavi is presented as the founder of the East Side Gallery. That is a false statement that gives the South Korean wall project the appearance of unbroken originality. 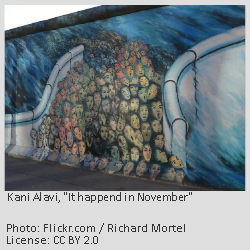 Kani Alavi speaks not only with representatives of states, but also with representatives of the press in Germany and abroad. In October 2019, he took part in a three-week exchange program by the RIAS Berlin Commission. Alavi traveled to the US. Here he met with representatives from CNN, NBC, Bloomberg and Reuters. A report written by himself and published by the RIAS Berlin Commission provides this information. The report is entitled with „Kani Alavi, artist, initiator of the East Side Gallery, Berlin.“ In this setting, CNN also reported on Kani Alavi as the founder of the East Side Gallery. Similar headlines and introductions can be found for years in German newspapers such as the Hessische/Niedersächsische Allgemeine (2012), in the national weekly newspaper Die Zeit (2013), but also in radio reports such as KBS World Radio (2015).

An evaluation of the publicly available eyewitness interviews by the journalist Ralf Gründer contributed to this article. The interviews are published in Ralf Gründer, https://www.berliner-mauer.de/kunst/east-side-gallery